Blastolene Brotherhood:
No Limits When it Comes to Creativity

The distinguished Yale lecturer William Lyon Phelps once said that assumptions should be thrown out about every three weeks. But for the madmen who design out-of-this-world vehicles under the proud moniker of "Blastolene Brothers," Phelps didn't go quite far enough. 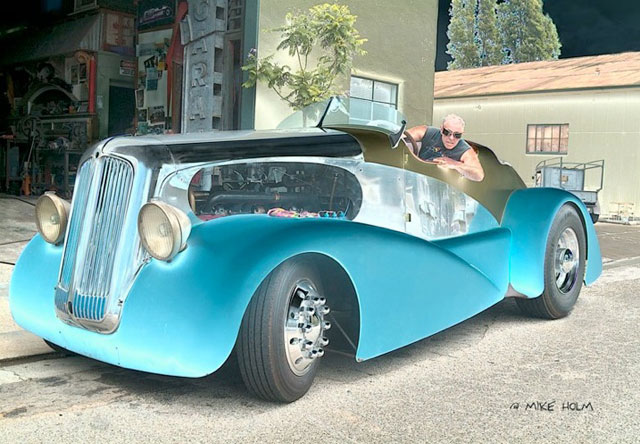 "Big Bertha" (above) and "Roadkill" (below) by the Blastolene Brothers 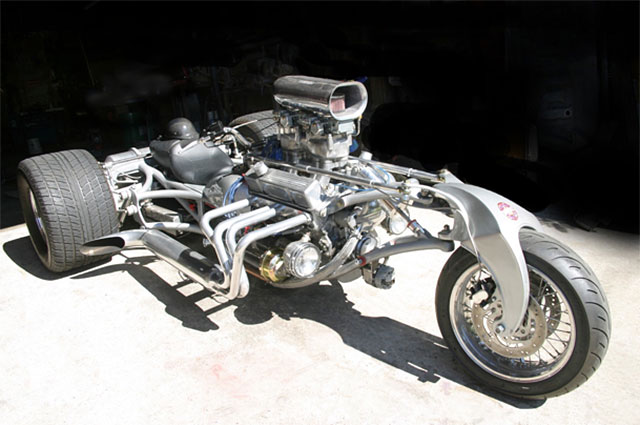 "Assumptions," says Blastolene aficionado Michael Leeds, "have to be tossed out every day. You think of the craziest design you can. And then you take it even further. If you're one of the Blastolene Brothers, there are no assumptions, no limits."

Case in point: "Big Bertha," a monster of a concept car that Leeds designed and built from the ground up. Part race car, part muscle car, and part Bat Mobile, Big Bertha will be showcased at this year's Pacific Coast Dream Machines alongside "Blown Ranger." Crafted from one fluid piece of sheet metal and powered by a 1942 Fairchild jet engine, "Ranger" is just the latest in Leeds' street-legal stable of moveable art.

More a way of life than an actual organization, the Blastolene Brothers are loosely made up of mechanics, artists, and designers Leeds has met at both art shows and car shows. The group includes people like Los Angeles artist Baron Margo, whose showcase vehicle combines roadster elegance with an updated sense of "Lost in Space."

Another sculptor, Michael Cooper, took his talent from the art studio to the garage when he combined a 1933 Ford truck, a blown 353 cubic inch Chevy small block engine, and a whole lot of imagination to create "The Tubester."

Then there's Arizona's Rodney Rucker, a man who sees potential in every vehicle he comes across. This includes an authentic stage coach that he motorized and drives from the same seat where, a hundred years ago, the driver held reins and horse power came from actual horses.

Leeds says he and his fellow Blastolene Brothers are grateful they get to follow their dreams—and are conscientious about their part on the planet.

"I've converted Big Bertha from regular gas to propane, and plan to do the same with Blown Ranger. It's a good first step," he says. "We are all looking for the next innovations to make our cars environmentally friendly. That's going to be a huge part of where I go with upcoming projects."

Leeds has no doubt that the American car-driving future will include "sustainable" vehicles that will not only look beautiful, but also perform to top standards.

"We can figure this out," he insists. "Throw away the assumptions, and take the borders off our thinking."

In other words, think "the Blastolene way."