In 1902, Henry K. Holsman officially rolled his first high-wheeled Holsman motor buggy onto the showroom floor. Over a century later, his grand-nephew, Moss Beach resident Jim Holsman, will be bringing his own, beautifully restored Holsman to the Pacific Coat Dream Machines Show, April 30 at Half Moon Bay Airport, where he expects it to cause as much of a stir as did the very first Holsman.

"I had been looking for one for about ten years and was getting kind of frustrated," Holsman says. "People just don’t want to part with them. And then I just missed hearing about one that went up for auction in Holland. That one ended up going to Russia."

But his luck changed several years ago when the owner of a Holsman passed away and the car went to auction in Hershey, PA. "My Holsman had been displayed in the Blackhawk Museum in Danville, and it was beautifully restored," says Holsman. "Sometimes, I still can’t believe it’s mine."

Although his Model 3, which originally cost around $700 and is now valued at more than $50,000, had been restored to its original splendor, Holsman was a bit leery of firing it up right away. "I wanted to tinker with it a bit, get to know it, and then start it up on a day when I knew I had a lot of time and could savor the experience."

He ultimately decided it was the perfect way to welcome in 2005, so on New Year’s Day, he and a few friends fussed with it for a short time. "I was kind of surprised actually how easily it started," he laughs. "It was just a great experience." 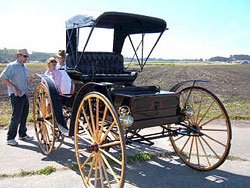 Loyal to the original design intended by his great-uncle, Holsman eschews the electric starter, most likely installed during restoration. He prefers instead the old-fashioned crank start to power up the car’s 2-cylinder, 12-horsepower motor. To navigate, it has a tiller that doubles as steering device and throttle.

"I can push it to 20 MPH," says Holsman, "but it’s a lot happier at 5 or 10 MPH. it has a very high center of gravity due to the wheels, so slower is definitely better."

Owning a Holsman also significantly puts a damper on any long distance trips; its gas tank only holds 5 gallons. "I did read about a fellow who actually drove from California to the New York World’s Fair," says Holsman, "but I don’t think I’ll be trying to replicate that."

Commonly known as a motor buggy, Holsmans were exactly that — horse carriages modified with a motor, steering, and brakes. Like other motor buggies of the early 1900s, Holsman automobiles were known for their high wheels, which afforded better navigation on primitive rural roads, where mud and deep ruts were a regular event. 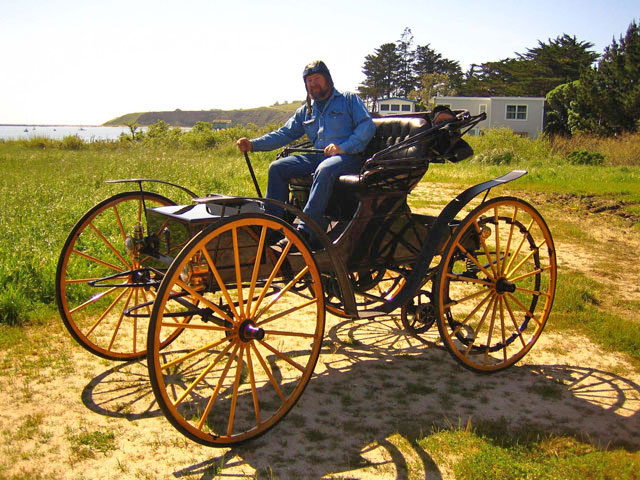 "They were designed for people who needed the convenience of an automobile but lived in rural areas," explains Holsman, "people like doctors, vets, or even farmers."

The wheels are wooden and rimmed by either steel or hard rubber. Some Holsmans even came with modified axels that allowed for a horse to be hooked up in the event a car became stuck. Among other intriguing features of the Model 3 are its rope drive, which turns the rear wheels, and the headlights, which are oil lamps that must be lighted with a match.

A variety of different models of Holsmans high wheeled automobiles were manufactured between 1902 and the company’s demise in 1910. "My great uncle was not known for being too progressive," Holsman admits. "Between that and the advent of (Henry Ford’s) Model T, the company went under."

There are no hard and fast numbers on how many cars were actually produced, nor how many remain today. Suffice it to say the Holsman is exceedingly rare.

To some, this unique vehicle is an interesting stop in automotive history, but to Jim Holsman, it has a far deeper meaning. "Like other inventive members of my family, Henry K. Holsman was really a pioneer," he says. "I really can’t describe the feeling of sitting in this car that was designed and manufactured by my great uncle. It’s not just automotive history—it’s family history."